Want more time? Change your relationship to it 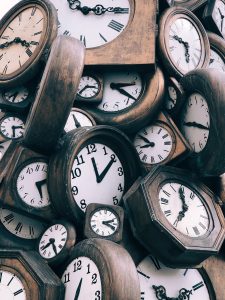 Do you feel like you don’t have enough time? Do you feel like time is passing you by so quickly that sometimes you can’t quite catch your breath? At the end of the day do you feel a mix of dread, panic, and guilt at all the things that didn’t get done wishing you had more hours in the day? If so, you likely don’t feel very successful and struggle with exhaustion and creating time to care for yourself.

If this sounds familiar, you’re not alone. And there is a better way to live.

Time is integrated into every aspect of your life. Yet there’s a lack of clarity around what it is, how to be with it, and a pervasive scarcity mindset towards it.

In Alan Burdick’s Why Time Flies, he digs into the concept of time. After reading it I was blown away by my own poor mindset around time and it made me rethink what time is and isn’t. This new perspective helped me create a healthier relationship with time. I no longer blame it but instead, take a deeper responsibility for what actions I take during this moment we call time.

Here are five facts about time that’ll make you want to stop wishing for more.

1. Time is only a fancy average.

The N.I.S.T., a federal agency that helps determine the official time for the United States, has two labs with dozens of clocks to track the time. Often these clocks disagree so an average is determined. This average along with other time lab’s averages is then sent into the international time lab to average again, which gives us the Universal Atomic Time. Without averaging the times one country might be slightly off from another.

So, at best, the accurate time is merely an average or an estimation of recorded times from the past, which then synchronizes us for the present.

Time is not as accurate as you think. Yet we rely on it as an accurate measurement of our life. By doing this we are not just metaphorically, but literally stuck in the past more than we are living in the present! Holding onto what could, should, would have been. Instead, try on the mindset that you have all the time in the world for what is most important right now. Right now is the only moment that really exists.

The earth’s rotation is gradually slowing, which means a full rotation is getting slightly longer. So, every couple of years it is enough of a difference to add a second to the 24-hour day.

Since 1972, nearly half a minute’s worth of these seconds has been added to the International Atomic Time so it’s in sync with the planet. Our day is actually longer than it was for our ancestors and shorter than it will be for future generations. So, when you ask for more time in a day, you’re actually already getting it (albeit slowly).

Ironically though, more time won’t help you get it all done. Because no matter how much time you get, it’ll never be enough; you’ll still try to squeeze more out of a day than what is humanly possible. Until you change how you make decisions with what to do in the time you already have, you won’t feel like you ever have enough.

When I learned the concept, “Less is better,” things started to shift. Less in your day, less expectations, less “yes’s”, simply less.

One reason it’s hard to have a healthy relationship with time is you don’t have an accurate perception of it. As pervasive as time is in our society, you don’t have an organ or part of the brain that tracks it accurately. Ears hear, eyes see, the tongue tastes, and nerves feel, but there is no accurate tracking system in your body for time.

The circadian rhythm is thought to be the internal clock. But it can vary by two dozen beats. In mammals, the main circadian clock is in a part of the brain called the suprachiasmatic nucleus, but it can’t calibrate on its own. It needs the sun (and night) each day to reset. If you’re left in a dark cave or in constant light your internal clock gets totally thrown off, and it can happen pretty quickly. You need regular calibration, which means you really can’t rely on your internal clock for long.

And you have lots of different internal clocks: studies are showing that every cell, muscle, and organ has its own time rhythm. In one study of 25 kidney transplants, it was found that 7 of the kidneys ignored the new owner’s circadian rhythm and instead stuck to the rhythm it had from its donor. The other 18 kidneys fell in sync with the new owner’s rhythm but in opposition; they were most active when the existing kidney was least active and vice versa.

So, when you hear someone marches at the beat of their own drum, it’s pretty true, and all of us do it. This means there is no accurate perception of time, and due to our minds’ natural negativity bias, you will subconsciously default to a perception of scarcity (not having enough time), instead of a mindset of abundance (you have enough time for what you need to do).

4. When we eat matters

Food sends a super strong message to our internal clocks, especially the liver. If you want to be healthy, pay attention to your internal rhythm, which aligns with typical mealtimes.

A few studies have shown the impact changing eating times can make on mice. In one study mice were fed at the wrong time of day resulting in them gaining more weight than mice eating at a normal mealtime. In another study, mice were fed in the middle of their sleep cycle, and soon the mice learned to wake up shortly before eating time automatically.

The most dramatic study was done at Harvard with 10 human volunteers, who were trained to live on a 28-hour day. On the 4th day their schedule flipped (awake and eating in the middle of the night) and 4 days later their schedule flipped again back to normal. After just a 10-day study their blood pressures skyrocketed, blood sugar levels were above normal, and 3 volunteers were diabetic. The study concluded that these negative effects were due to the inconsistent times of the day they were eating, which prevented their organs and cells from synchronizing.

Eating healthy and on a schedule is just as important as getting good sleep and doing less. Treat your body with respect and your mindset will follow.

5. Time doesn’t fly as you get older, only your perception

I’ve heard that “time flies as you get older,” my whole life. I feel it myself. The older I get, the faster I perceive the year flies by. But apparently, it’s not true. Just something we like to say.

Steve Baum, a psychologist at Sunnybrook Medical Center in Toronto did a study that found time does not speed up for a person with age, but rather it speeds up with one’s psychological well-being. And another study had similar findings.

When you are happy, busy, concentrating, socializing, or intoxicated (presumably because we are both socializing and happily busy) time feels fast. Conversely, when you’re miserable, depressed, bored, tired, or if your psychological well-being is lower; that’s when your perception of time really slows down.

So if you feel like time is zipping by, it may not be such a bad thing, your psychological well-being must be up.

What do all these seemingly random facts about time mean for you?

Time isn’t a commodity. It can’t be bought, sold, rented, borrowed, stored, saved, or renewed. You can’t hold it, see it, touch it, hear it, or taste it. The only thing you can do with time is perceive it as passing by: quickly when happy and slowly when not (with that choice, I’d rather have it fly by).

You don’t need a better time management tool or technique; none of us do. Time can’t be manipulated to please you, instead, a better way is to shift your relationship with time and make a better choice in what you will do with your precious time on earth. Do less. Attend fewer meetings. Say no. Get clear on what’s most important to you right now.

What is your relationship with time? Does it need to change? Are you trying to wring more seconds out of every minute, only to piss others off because you’re late all the time? Do you think you don’t have a choice in how to spend your time? If you want to work on having a better relationship with time so you can be more present, I’m here for you.

« There Is No Balance, But You Can Get Centered
What is Your 2021: Languishing or YOLO? »