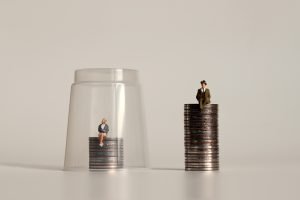 Early in my career I worked in tech and engineering start-ups where most of the employees were men. Being a woman in HR (and often the only woman), I was the go-to/catch-all. I was young and didn’t know how to set clear boundaries or say ‘no’, so I fell into the trap of taking on way too much — bad habits that would take years to break.

Sure, being a ‘go-to doer’ fast-tracked me in building trust, but I was exhausted and doing way too much for male managers who didn’t want to have difficult conversations or manage their staff. I was the one behind the scenes managing staff and influencing people to get things done, but unfortunately the senior leadership didn’t see this and I was not viewed as a leader (even though that’s exactly what I was doing, but behind the scenes) because the male managers were taking all the credit.

Unfortunately, we are still not at the point where women can be fully themselves in the workplace and receive deserved recognition. The bias is real, such as when women are seen as angry or bitchy when we are assertive. (If this sounds familiar, check out my post on “How to Be Empowered During Conflict and Stop Being the Nice Girl!”.)

Women are making some progress by earning more bachelor’s degrees than men and women-owned businesses are on the rise. However, increasing the proportion of women at all levels of the workplace is stalled.

It’s still a man’s world. Regardless of how the #metoo movement has brought bad behavior into the light, the misogyny is institutionalized.

I learned a lot over the years about how men work differently than women (which is primarily due to how we are socialized). Here are my generalizations of those differences (yes, I know people don’t like stereotypes, but they exist for a reason). By naming the differences, I hope you gain clarity in order to move forward by working more effectively with men, so more of us can move higher in the ranks of companies (and finally change the rules).

1.  Women want to discuss for the best possible solution; men want to solve.

Women have been socialized to be ‘good’, which means we have a bit of perfectionism. One way this shows up is by overthinking nearly everything.

When there’s a problem, a woman might go over things in her head again and again, sometimes not being able to turn it off and losing sleep. Regardless of how carefully a problem has been mulled over, she’ll also want to talk it through, using the opportunity as a way to build connection with those to whom she is close. While the solution is important, so is the process of getting there. The benefit is, when a solution is approached this way, it’s been well thought through by several minds.

When a man approaches a problem, he’ll think about it and stop when he comes to the first viable option. Then he moves on. There is no need to chat about it with a buddy or lose sleep over it. This approach allows him to demonstrate his knowledge and ability with efficiency, even if the solution is not necessarily the best.

When talking with a man about a problem, let him know you want to talk it through with him to find several possible solutions; this shifts the goal from one solution to many. If you just want a sounding board, let him know that, too (no solutions necessary).

2. Men speak confidently, even when making shit up. Women don’t, even as an expert.

When I was first dating my husband, I took what he said at face value. I simply believed everything he told me (why wouldn’t I?). He has the believable combination of being one of the most confident men I’ve ever met and knowing a lot of random facts (often useless, unless playing Trivia). So I used to ask him a lot of random questions. He’d then confidently give me his best guess but present it as if he just finished reading a research paper on the exact question I just asked. I now know to ask him if he read it somewhere or if he’s making it up. And if it’s a guess, he’ll tell me.

When a woman speaks up about a topic, she will likely know more about that topic than her male counterparts. That isn’t because women are innately smarter (although we might be). A woman is likely to know more because, to get to the same level in a company as a man, she typically has to study more and work harder. She doesn’t guess and will often hold back unless she absolutely knows the answer.

A women also wants to collaborate and doesn’t want to come across as shutting others down, so she leaves room for other people’s suggestions. She will end by asking what others think or have a tone of voice that sounds like a question at the end instead of an answer.

The combination of not wanting to guess and presenting the information with room for others has the unfortunate result of women coming across as less confident.

Ladies, you know your stuff! Stop second guessing yourself, speak up, and use a strong, even tone (practice out loud if you need to).

Unfortunately, most men were raised to ignore their feelings in a culture that normalizes toxic masculinity. Since men currently dominate the higher levels of organizations, this toxic masculinity is too often the norm in the work environment. Therefore, workspaces are expected to be void of feelings.

(That’s a bummer, since neuroscientist Antonio Damasio proved we are basically emotional beings and wouldn’t be able to make a decision without emotions.)

By contrast, most women were allowed to express their feelings while growing up (anger being the exception). That’s why, when feelings come up at work (where it’s not considered acceptable to show or process them), it creates a huge strain for women. They have not lived their lives hiding their emotions, though it’s actually much healthier to process them openly.

Since emotions don’t dissipate (and, in fact, escalate if not processed), it’s important that women find ways to process emotions regularly outside the office. You can write them down, talk about them with your support network, etc.

You can also build support alliances inside the workplace and softly educate your male colleagues. Connect with men one-on-one, or go for coffee or lunch with those you feel would help support you in your role. Then start softly educating them on your perspective. Often, they don’t have any idea how their behavior in the office impacts women or how it can be challenging. You can also find out their experience; get curious.

When an emotion does show up at work, name it — without apologizing or judging yourself. For example, if you’re getting upset due to not being heard, say something like; “I get that you aren’t used to me speaking so passionately about this topic; it’s because I have researched the problem and I have a great solution.”

As a bonus tip, stop volunteering for office “housework” like organizing lunch or the office party. Let a guy volunteer next time, or no party!

Even if we still need to navigate on men’s terms today, I do think there is a brighter future ahead where these norms will change — and hopefully for the better. With the increase (albeit slow) of women in senior leadership roles and gender identity becoming more nonconforming, socialization of gender norms will be reduced and “a man’s world” will surely be dismantled.

« Don’t believe the hype – you don’t lack confidence!
Fall Back to Happiness »