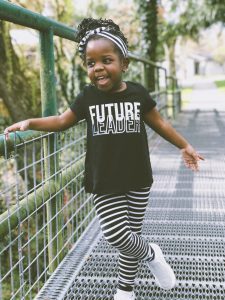 I recently attended a Women’s Leadership conference (virtually, of course), where I enjoyed hearing journey stories of female leaders from all sorts of traditionally male-dominated industries. There were some amazing women!

There was also a common theme coming from the speakers. Over and over I heard the message that women must BE confident.

While good-intentioned, this can be tough advice to swallow, especially if you’re already trying your best, yet still struggling.

The message to “be more confident” felt like it blamed the woman for not being accepted in a man’s world instead of addressing the real issues. Telling female leaders that they just need to be more confident in order to level up their career in a man’s world puts the issue solely on the backs of women. We are basically telling them to be the best men they can be.

Support Women: Stop blaming them for feeling out of place.

It’s totally normal for a woman to feel she doesn’t belong when she’s the only female at the table and not feeling much support for being there. Sure, men might say they’re in favor of women in leadership. But the proof is in their actions, not their words. What are they actually doing to support women? Likely, not much.

From a young age, girls and boys are socialized differently. As children, boys are taught to take risks and compete, regardless of how they may feel inside, whether it be in sports, climbing a tree, or asking a girl to join them on the school dance floor. Boys are taught to not cry, to suck it up and deal with it.

Boys are taught an inhumane, but valuable, skill – how to ignore their feelings and move forward to take risks and compete to be the best.

Girls, however, are taught to be polite and considerate. In other words, to be accommodating and put other people first. They are brought up to be caretakers of baby dolls, which means taking on the mental load of the family. They are taught to be clean and pretty, which translates to paying attention to how they look and how everything looks around them – to fit in.

This means, if a woman takes risks normally reserved for boys (or starts to appear in rooms and at tables where she was not taught it was ok to participate), there is a cost. She is getting the unconscious message, both from others and herself, that she shouldn’t be there. She feels like an impostor.

“Surely there is someone else that is more qualified than me for this role; I’m a supporter.” This is the unconscious belief running in the back of a woman’s mind as she holds her breath, hoping no one will notice the discrepancy.

Thankfully, the social norms of the past are definitely changing and children are hopefully being raised with the benefit of thoughtful parents to break these unhelpful gender roles. But most of today’s leaders were raised in the old-school way of thinking, and not all parents are aware of the unconscious sexist messages they are teaching their kids.

Impostor syndrome is seen as predominately a women’s issue, although studies suggest that more than 70% of people (men and women) experience impostor syndrome at some point in their career.

We need to address the root causes and not blame women for feeling like impostors, because they are not alone.

Women’s gifts are misinterpreted as lack of confidence.

Women are often seen as lacking confidence when, in fact, the problem is that their actions are being wrongly interpreted.

The real issue is a lack of understanding about how women respond differently than men. This has a huge impact on the workplace culture, as Kate Lanz explains in All the Brains in the Business.

In general, men produce between 5 and 20 times more testosterone than women. Testosterone is the hormone that promotes dominance and competition.

On average, women produce between 5 and 20 times more oxytocin than men. Oxytocin is the hormone that promotes bonding and collaborative behavior.

With lower testosterone levels, women generally care less about their place in hierarchy and more about being in relationships with colleagues rather than competing with them.

Many organizations say they want to create cultures of collaboration to enhance innovation. Yet they overtly reward and encourage behaviors that promote individual winning, drive hierarchy, and promote competition. At best, this means the relational and collaborative power that is more common to women goes largely unrewarded; at worst, women are told they are not confident and are made to feel wrong.

Apologies are yet another way a woman is misconstrued as lacking confidence. Women have been told to stop apologizing because of studies showing that women are more likely to apologize than men.

In fact, the reason women apologize is not because they lack confidence. Instead it’s a technique to ‘match’ their colleagues and demonstrate equality of connection rather than competition. For example, if a woman says, “Sorry if someone has already mentioned this, but one thought I’ve had is…”, her intention is to put a colleague in a meeting at ease.

Yet, more often than not, this strength (a woman’s inherent ability to create connection) is construed as weakness and, to make matters worse, the woman is then told she lacks confidence. If she wasn’t questioning herself before, she surely is going to start having doubts now. This feels a bit like gaslighting. And even women with good intentions are doing it to female colleagues, because ‘acting like a man’ is how they fit in.

If men — and anyone in a power position — understood the different ways women communicate, solve problems, and engage (among many other differences), then workplace culture would truly support innovation and creativity. Differences would be celebrated because they would be recognized as a benefit for everyone.

Unfortunately, we are still in a man’s world. It’s changing, but not fast enough. Before things truly change, it will take many more female leaders who are allowed to be their authentic selves.

In the meantime, don’t let others convince you that you are not confident — that’s a surefire way to lose your confidence.

If you think lack of confidence is your real issue, read: Confidence – Stop Looking and Start Acting.