Guilt: Let it go before it takes you down 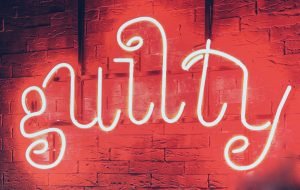 As Thanksgiving approaches, it is customary during this time to express thanks and gratitude. It’s supposed to be the season of love and happiness. But in reality, too often it’s the season of guilt, due to unmet expectations.

Evolutionary psychologists argue that guilt is supposed to help you navigate the social world and maintain interpersonal relationships. It’s supposed to help moderate your behavior and make sure that you don’t hurt, embarrass, destabilize, or dehumanize yourself or others.

The reality is, guilt has turned into something much more toxic than a tool to get along, especially for women.

I have a client who has a strong gratitude value. She feels super fortunate in life, like she has won the life lottery. And she believes she should express gratitude daily, especially when she’s having a tough day (because she believes her tough day is nothing compared to ‘real’ problems in the world).

But one day she didn’t do this. She was having a really tough day and her negativity bias got the best of her. She didn’t express gratitude and she felt stuck in the muck. This eventually passed (as bad days do). But she then beat herself up about not being grateful in the moment. And she felt really guilty, believing she really didn’t have anything to complain about, therefore she didn’t have a ‘right’ to have a bad day in the first place. In essence, she gave herself a double-whammy of feeling pretty shitty — first the bad feelings about having a tough day and then feeling guilty when she didn’t handle it perfectly. Her unrealistic and unmet expectations (perfectionism) combined with guilt turned into a nasty toxic cocktail.

As you may know, she isn’t alone. How often do you feel guilty for doing nothing whatsoever wrong, but for just simply being human?

This guilt can be embedded at a very young age. According to researcher Peter Breggin, guilt is a negative legacy from biological evolution and childhood. Before you were cognitively able to recall or understand what was happening, you were having guilt triggers embedded.

What’s worse is that women actually feel more guilt than men. A study in the Journal of Health and Social Behavior showed that women tend to feel about 30% to 40% more guilty and distressed than men when they have to take work-related calls or emails at home. This study focused only on work boundaries, so it’s not difficult to imagine how much more guilt women have in other areas of their lives.

According to researcher Itziar Etxebarria, who published a study in the Spanish Journal of Psychology, women feel more guilt because they are socially conditioned to do so. There is no physiological or evolutionary reason for the difference. “This is caused by certain educational and social practices, which demand more of females and which are sometimes still in use despite belief to the contrary,” says Etxebarria.

And then there is another form of unwarranted guilt; I’ll call it the “gift guilt”. This is the remorse that arises when someone does you a favor and, instead of feeling gratitude, you respond with guilt, due to failing to meet an imaginary obligation you had set for yourself. According to researcher Phil Watkins, “People do feel indebted and grateful at the same time,” and “if you feel too indebted, then it’s hard to feel grateful.”

With all of this unwarranted guilt flying around, it’s no wonder that our emotional energy can seem so easily spent!

Here are a few tips to shake off that unwarranted guilt:

1. Recognize where the guilt is coming from.

According to Mark R. Leary, Ph.D., a professor of psychology at Yale University, one form of guilt arises based on standards internalized during childhood. So, before you accept guilt for something you did, take a minute to ask yourself, “Am I consciously living by my own expectations?”

For example, perhaps growing up, your mother vacuumed and dusted the house twice a week. You may not feel that this is the best use of your time and energy, so you choose not to do this in your own home. Yet, you feel guilty about it, nonetheless. In cases like this, it’s important to recognize and differentiate between your mother’s priorities and your own.

If you’re feeling guilty and there’s nothing to feel guilty about, it serves no rational purpose and you’re therefore wasting valuable energy. Building awareness is your first step to letting it go.

2. Recognize that no one is perfect!

Making mistakes is part of being human. You’ll occasionally be late, say something you regret, or make a huge error at work. It may not make it OK, but accepting your humanity can help you move on. Learn from it, integrate the learnings, and let it go. So, the next time you do something regrettable, take action and skip the days, weeks or months of beating yourself up because you should’ve been perfect. You’re not perfect and neither am I nor anyone else.

That joke you told at the office party may sound horrible when you replay it over and over in your head. But, if you tell a friend about your regret, it may not seem so bad. “Secrecy is the intensifier of guilt,” says Edward Hallowell, M.D. Allowing a fresh perspective and discovering that your friend doesn’t think your joke is that shocking lets the guilt drift away.

Even if your friend is shocked, by discussing the issue openly, “you accept the fact that you’re not perfect, that you’ve done things that aren’t pretty,” says Hallowell. But that doesn’t mean you should continue to punish yourself.

Connecting with others and letting them know about your guilty feelings will allow another perspective to shine through and highlight that the guilt is not warranted. Even if you don’t let it go right away, there will be a shift and, over time, it will lessen.

“Working out is like hitting the reset button on your brain,” says Hallowell. “It’s hard to exercise and feel guilty at the same time.” So, the next time you’re in a funk, get out for a run, go biking or have a personal dance party. It may not fix the originating issue, but it’ll get your mind in the solution mode instead of the self-loathing mode.

Expressing gratitude is important. Studies show that individuals who express “gratitude were more optimistic and felt better about their lives.” A regular gratitude practice helps train your brain to look for the positive as well, countering our negativity bias.

The practice consists of writing down 3 different things you’re grateful for each day. The more consistent you are, the better the results. The key is having the practice come from a place of love and appreciation — not guilt. You’ll know the difference by feeling it in your body. Try it for 3 weeks and see if you notice a difference in how you feel. If you feel a bit lighter and simply better, it’s working.

Do you have some unwarranted guilt that you need help shaking off? Do you struggle with perfectionism or beating yourself up? If so, I’m here.

« Anger: The untapped emotion for women to evoke change in the world
Year-End Reflection »